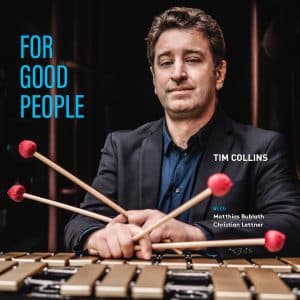 It is a stroke of luck for the German jazz scene that New Yorker Tim Collins came to Munich twelve years ago. The 45-year-old belongs to the small group of the world’s best vibraphone players. American critics already attested to this when he was still playing in his home country with musicians like Ingrid Jensen or Aaron Parks: Collins “is nothing less than exemplary,” wrote Downbeat Magazine, for example.  Across the pond, he has proven it in collaborations with a wide variety of greats from John Hollenbeck to Danny Grissett to Henning Sieverts or Shinya Fukumori to the world musicians Quadro Nuevo or the young whiz kid Shuteen Erdenebataar.  Now he underlines it with his fifth album “For Good People”..

Collins composed the title track in the fall of 2021 after learning about the death of an old friend. “In the past few years, I’ve lost more than a few good people in my life,” he says. “I wanted to pay tribute to them, but also to the good people who are still here.”  The piece therefore became the album’s eponymous motto – but without any gloom at all. “After the darkness of 2020 and 2021, I wanted to look to the future with a more positive approach,” Collins says. As a result, the music is upbeat and joyful throughout. “The goal was to write music for my friends while having as much fun as possible. If we’re having fun, we know the audience is, too.”

One of his friends, who has been playing with him for many years but for the first time in this trio lineup, is 48-year-old Austrian drummer Christian Lettner, who learned his instrument from the age of eleven and studied at the music academies in Graz and Linz. Since the late nineties he has been one of the most sought-after European drummers, playing with Karl Ratzer, Nils Landgren, Jocelyn B. Smith, Adrian Mears, Joo Kraus, Johannes Enders or the WDR Big Band, among others, and has been a permanent member of Klaus Doldinger’s “Passport” since 2000. He is also a professor at the Salzburg Mozarteum and, more recently, at the Hochschule für Musik und Theater in Munich.

Then there is the Munich keyboard man Matthias Bublath, probably Collins’ most important and oldest companion. After studying in Linz, at the Berklee College of Music and the Manhattan School of Music, Bublath lived and worked in New York for nine years, and the two have known each other since then. Part of Bublath’s enormous productivity and versatility – he has, for example, recently released albums with a piano trio, solo piano and his “Eight Cylinder Bigband” – is that he is an outstanding specialist for the Hammond organ. This is what he plays on “For Good People”, while also contributing four compositions to the record.

Thus “For Good People” presents itself in the rare instrumentation of vibraphone, organ and drums, and accordingly contains the rousing mixture of heavy groove, catchy melodicism and technically outstanding solos. Starting with traditional jazz contexts, it moves through funk and African rhythms to neo-Romantic Mehldau-esque textures. The wild ride begins immediately with “Mainline Rush”, the opening track. After all, Collins’ piece is inspired by his nephews’ love of trains and races down the tracks like a locomotive accordingly. “Trapped” – the first of four Bublath compositions – is an odd meter piece with ethereal qualities. “Don’t Get Caught,” on the other hand, demonstrates with a driving 3:2 clave rhythm the deep connection all three musicians have to Afro-Cuban music – with Collins having the great vibraphonist Cal Tjader in mind.

It continues with “Jak’s Joint,” a fun and relaxed backbeat number that makes you think of late-night diners with a band that plays all night.  Next comes a complete mood change with the nostalgic, dark, and restless “Down The Old Road“. “I was thinking about the dark road in Lake George, NY, that led to a small lakeside house where my grandparents lived. It was always creepy at night, but you knew there were good people waiting for you in the house at the end,” Collins says. “Situli Shuffle” administers a hefty pinch of New Orleans – after all, Collins and Bublath spent a lot of time together in the birthplace of jazz, soaking up its rich musical history. Perhaps the most adventurous piece on the album is Bublath’s “Biboul Youssef.” Its unison melody, based on African rhythms, is reminiscent of seventies prog-rock bands like Yes or Genesis – but still remains jazz. Finally, the only cover song is the standard “Sweet and Lovely” in a light-hearted arrangement by Collins.  “I love good melodies,” he emphasizes. “I don’t think of playing standards any differently as I do originals – it’s all about playing great melodies. ‘Sweet and Lovely’ is one.”

So are all of them on this consistently enchanting album. A little masterpiece by and for “Good People.”